If you've spent any time at Walt Disney World® Resort you know this: You don't have to walk very far to find a guest celebrating a special occasion or milestone. Birthdays, anniversaries, first visits, marriages, honeymoons . . . celebrating here is in many ways a rite of passage.

Last week, Mike Greenberg and Mike Golic joined the millions of guests who have commemorated a crowning achievement with us. In their case, it was the celebration of an anniversary – 15 years hosting their wildly popular national radio show, "Mike & Mike." A show that had modest beginnings now airs daily on ESPN Radio and is televised on ESPN2. 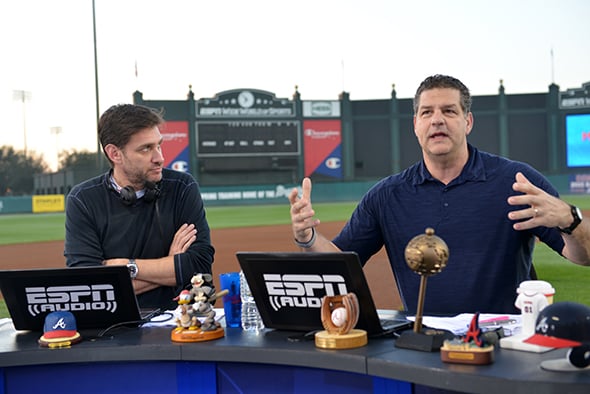 The festivities kicked off on March 4 at ESPN Wide World of Sports Complex, where the duo hosted a special show exclusively for Disney Cast Members.

It all culminated on March 6 when "Greeny" and Golic celebrated their 15th anniversary broadcast live at Downtown Disney® in front of hundreds of fans (many who showed up as early as 3 a.m.). Celebrities and athletes, including comedian Frank Caliendo and Pro Football Hall of Famer Cris Carter, showed up in person to reminisce on the show's impact over the last decade-and-a-half. ESPN Wide World of Sports Complex is no stranger to special occasions. For many athletes, it's the apex of the youth sports experience where championship moments happen daily. Just ask Greeny and Golic – everyone here is united in the spirit of sports.

David Giardino is a Marketing Manager for ESPN Wide World of Sports and Disney Youth Programs.